B. Borooah College was established in the year 1943 in the name of Bholanath Borooah, a doyen of Assamese business and a close associate of Sahityarathi Lakshminath Bezbaruah .It grew under the shadow of World War II and as a part of the nationalistic struggle against foreign rule. Classes (evening) started from 13th of September 1943 with 15 students in the premises of Kamrup Academy H.S. School. The pioneers of the college first started it as a night college in order to give an opportunity to the poor students to pursue their higher studies as they earned their livelihood during the day.The college has been associated with the names of many illustrious personalities. Bharat Ratna Gopinath Bordoloi, the first Chief Minister of Assam, was the first honorary Principal of the college. Charismatic Parliamentarian and a renowned man of letters, Hem Barua adorned the Principal’s chair for a long time. He was succeeded by Prof. Surendra Mohan Das, Dr. Promod Chandra Bhattacharya, Late Prasanna Kumar Sarma, Sri Dulal Chandra Borthakur, Sri H. C. Deka, Late D. K. Choudhury (in charge), Smti Bonti Choudhury (in-charge), Dr. (Mrs) Rekha Deka, Dr. Sunil Pawan Baruah (in-charge), Mrs Madhurima Das Deka (in-charge), Dr. Dinesh Baishya. At present Dr. Satyendra Nath Barman is serving as the Principal of this college.

About the Founder Principal

Bharat Ratna, Gopinath Bordoloi, the first chief Minister of Assam, founded B. Borooah College and rendered his services as the Founder President of Governing Body and Principal of B. Borooah College.Born on June 6, 1890 at Raha in Nagaon, Bordoloi was a brilliant student who post graduated in History and acquired a Law degree in Kolkata. He was a student when Lord Curzon created a new province by amalgamating Assam with East Bengal. The decision was withdrawn in 1912 following massive protests, but it had by then fuelled young Bardoloi's rebellious passion. Gopinath Bordoloi, one of the India’s most illustrious freedom fighters, was perhaps the only person responsible for keeping Assam and the entire North East as an integral part of the country. He served as the Premier of Assam for two separate terms during a crucial period of history.Gopinath Bordoloi along with some nationalist leaders and educationists of Assam decided to establish a college at Guwahati as the British administrators ordered discontinuation of study of the students of Cotton College who had joined the freedom movement. The same group of nationalist leaders formed the first Governing Body of the College in 1942. Classes of the college could not be started from 1942 due to adverse situation of the War and the Quit India Movement. Regular classes (evening) of the college were formally started from September 1943 at Kamrup Acdemy School. 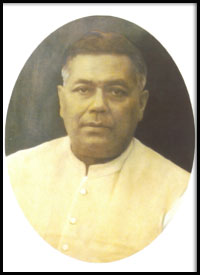